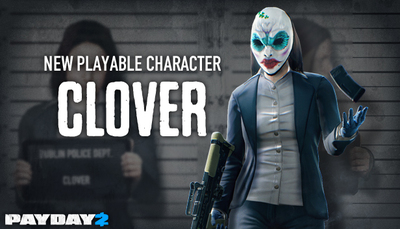 This is a restricted gift which can only be redeemed in these countries: China

The Luck of the Irish.The Clover Character Pack is the 14th DLC for PAYDAY 2. It allows heisters to play as Clover, the Irish Burglar of the PAYDAY gang. Other than Clover herself, it includes the Burglar perk deck, Clover's mask, Clover's Shillelagh melee weapon and the Queen's Wrath assault rifle.